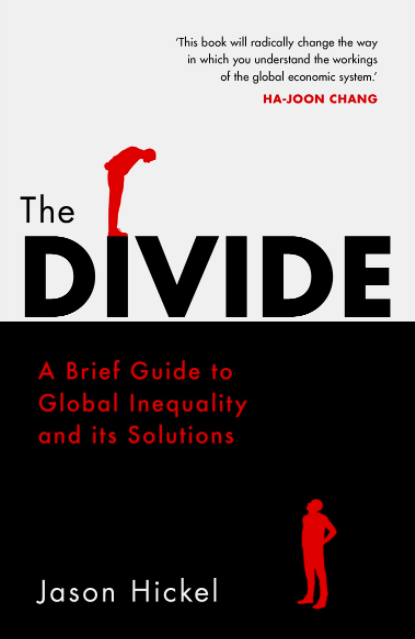 Everybody should read this book.

Only by gaining the intelligence and hope Hickel offers can we as a people hope to address the overwhelming issue of galloping consumerism that chimes with Climate Change and the widening division between the world’s poorest and the world’s wealthiest. Hickel is a professor of anthropology at the London School of Economics and his courage in this tell-all book is only tempered by the fact that he is not, as he says, the leader of a “developing” country.

The network of corruption webbing Western governments is nothing short of sticky evil and the various attempts at disentanglement by a few brave leaders over the past seven decades have led to their untimely deaths. After reading this book I am more than ever convinced that galloping consumerism is the greatest threat to our survival. As Hickel points out if we continue to consume and produce on this scale we will run out of resources long before the end of the century. And consider the waste. Already our planet is groaning under mountains of landfill and toxic waste. Chiming with this is the ticking timebomb of Climate Change.

Our lifestyles and our insane focus on increasing GDP with no end in sight is killing us.

To quote Hickel Page 265, “If Ancient Egypt had started with one cubic metre of possessions and grew them by 4.5% per year, by the end of its 3,000-year civilisation it would have needed 2.5 billion solar systems to store all its stuff. It doesn’t take a scientist to realise that endless exponential growth is absurd, in the true sense of the word. To imagine that we can continue on this trajectory indefinitely is to disavow the most obvious truths about our planet’s material limits. As Sir David Attenborough once so eloquently put it, “Anyone who thinks you can have infinite growth on a finite planet is either a madman or an economist.”‘

Hickel also says on Page 264, “Today, nearly every government in the world, rich or poor alike, is focused obsessively on the single objective of increasing GDP growth.”

It’s a grim picture. Our world is built on an unsupportable model of greed. Only a fool would believe that nations toppling other nations in the name of industry is sane and yet we have been trained to believe that war is justifiable and accruing more money than we can spend in a lifetime is commendable and patenting healing drugs is not a crime against humanity and allowing our neighbours to starve while we glut and waste resources is fine as long as we donate our spare change to charity.

Fortunately Hickel offers viable solutions: Debt Resistance, Global Democracy, Fair Trade, Just Wages and Reclaiming the Commons. All of which are doable if the will is there. And I would posit that as the climate deteriorates the will to heal our planet will strengthen.

I implore you to read this book and face the confronting truth about our current crop of leaders and the rotten-to-the-core banking system that keeps poverty firmly in place and also take heart as Hickel leaves us with the hope that awareness is approaching critical mass thinking faster than we realise, due in no small part to the efforts of Sir David Attenborough and the unique Greta Thunberg.

Imagination is a powerful ameliorative force. Let us imagine a way of life more sympathetic to the environment and healthier spiritually. The first step I believe is to SLOW DOWN. Learn to delay gratification. This means resist sating the hungers a fast-track life imposes – stop impulse buying, stop hoarding, gorging and looking for constant exogenous stimulation to allay boredom. Start finding pleasure in delayed gratification. Do things like: plant a garden, DIY renovate your home, grow your own vegetables, read a book, walk, swim, learn something new, have a real-time conversation, refuse fashion fads by developing your own style and making your own clothes or swapping clothes with friends and above all else, challenge yourself to pursue excellence. You’ll be amazed at how good achieving excellence makes you feel. It takes time to become highly proficient and its pursuit will cure you of boredom and the need for constant distraction.

Make your life meaningful. Make a difference to people. Help where you can. Get to know your neighbours and find out what they need. Challenge your mind and your spirit with meaningful relationships – with others, with yourself, with your work and with the planet.

And support the Arts.

The Arts are the soul and lifeblood of a nation, a community and a family. Artists are always in pursuit of excellence if they are true artists. If you want to understand discipline watch a dancer training, a singer doing her scales, an artist painting his canvas, a writer reworking her novel. It’s a rare artist who doesn’t care about his/her art. In fact, I wouldn’t call such a person an artist. I would call them a hack. True artists exemplify the blueprint for a new world – a world tuned to aspiration rather than gratification. A world in which excellence is the highest pursuit and I can assure you that mass production is anathema to excellence. Encourage and support producers of quality goods in your own community and eschew the cynical corporations that mass produce cookie-cutter products with built-in obsolescence.

Much of the economic dictatorship crippling the world today can be disempowered if people support each other in community solidarity. In times of strife and disasters this happens but we need to make this the norm rather than the exception. We have been taught to compete with each other and serve gluttonous corporations that operate on a principle of serfdom. If we pull together we will not be so dependent on faceless oligarchs.

To find solutions it’s imperative to think outside the square because nothing within the current paradigm is offering a solution. If we continue on this current trajectory of ever-increasing GDP and rampant consumerism we will destroy our planet and ourselves. We have been taught to value the wrong things and as Hickel points out so brilliantly much of this brainwashing is due to ADVERTISING. And I would add, celebrity-worship. Magazines feature the rich and famous and incidentally beautiful are, as Alain de Bouton says, bannering the WRONG ROLE MODELS.

These people are for the most part achieving little and earning too much and failing to show the average person what spiritual resolve and meaningful work looks like. There are people in this world whose jobs reward them with self-worth and exponential positive influence. Sir David Attenborough is one. Jason Hickel is another.

I will leave you with a final thought and I am aware that it may seem too simplistic but please consider it: If you strive to make a positive difference, all these problems – climate change, galloping consumerism, global indifference and the seemingly insuperable divisions between rich and poor – will be solved.

The New World starts with you.