via Catch the Moon, Mary – the MOVIE 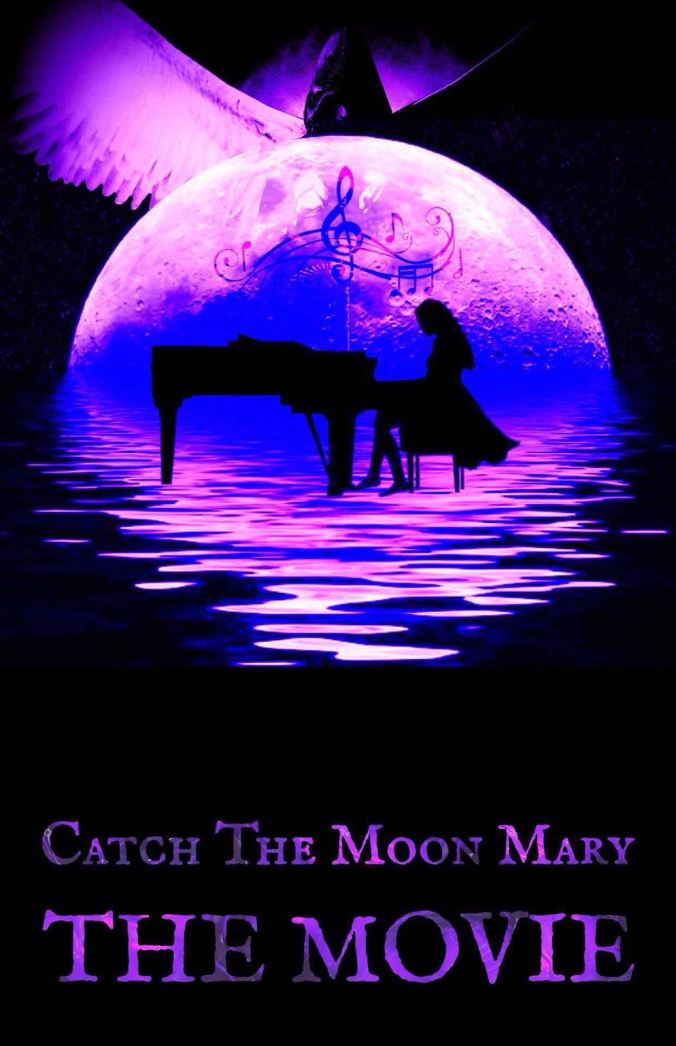 I haven’t written a blog in a while. Partly because the tragi-comic events playing out on the world stage have kept me glued to CNN and even the lame Fox news. I can’t add any more fuel to this abundantly-stoked fire so instead I will tell you about my very alternate world.

All my life I have lived only partly in this money-driven, war-obsessed, competitive world that humans call REALITY. It has never seemed real to me. It has seemed crazy. As a child I looked out my window at the stars. They seemed at once indifferent and yet familiar. They held their place in the map of infinity with dignity, certainty and harmony. They also held a secret formula for life that humanity could neither grasp nor intuit. For Millenia they had taken their places  in a processional that led to neither corruption or destruction. In a world daily changing and flirting with destruction what secret value bound the stars to their perpetual traverse? What did they know that humanity with its endless bickering, murdering, thieving and hoarding of wealth did not know?  What purpose kept the stars from colliding?

Years later, as an young adult on a holiday in Crete, I was looking out a similar window at a sky so black and unstained by earthly light that the stars appeared twice their size and crusted with light. Suddenly out of a clear sky a bolt of lightning forked, and hitting the sea, exploded. The sound deafened me for almost a minute. In that ensuing silence I felt intensely the released life force whose energy crackled in the air around me, animating everything it touched. And then I saw it – pure life. The stars were alive, shivering with animation and latent creative energy. They were endorsed by life. And I realised that by comparison the general run of humanity felt poor, cheated, angry, hungry for life. Most of humanity felt impoverished and half-dead despite their wealth in some cases, and so they peddled death, believing it was all there was. The stars orchestrated life, humanity traded in death. The wealthy hoarded gold to perpetuate a feeling of being alive but truly they felt dead and uninspired. The poor struggled to find shelter and food and longed to be rich in the erroneous belief that money would be proof against death. Most of humanity were puzzled about their purpose.

Humanity’s failure is its lack of cooperation and its lack of faith in itself. Forget God or whatever overlord you believe in. The lack is in us. We are part of a great network of interconnected energy available to everyone. Our passion will source it whether or not we sense our souls or believe in God. Life force is freely given. To be a conduit for all this freely-given energy, you must first “plug in” to your passion and develop it. Money is just potential for fuelling projects. It does not value-add to the character.

So, back to my alternate world. The stars showed me that life is a force greater than its opposite – entropy. The entropic are buying the illusion of lack. I live in a world of artists. I love them and draw strength from them, each in her/his own orbit. Occasionally we meet and discuss creating something new.

Recently I met some wonderfully creative people in the UK who approached me about adapting my novel, Catch the Moon, Mary and turning it into a movie. Ever since I wrote the book it has been a dream of mine to see it brought to life on screen by a creative team as heaven-mapping as the stars. This amazing UK team had every base covered, from screenplay to score and I handed the baby over, knowing it would be in loving hands.

Like minds attract and quickly move to agreement. The wonderful UK team are moving like lightning, bouncing ideas, keeping me in the loop and generally working with both precision and inspiration to make this team dream come true.

This harmony and energising cooperation should be the model and focus of humanity. I want to say if we can do it then why can’t politicians and nations? Why can’t they harmonise their efforts and finances towards improvement rather than inflating war? Why must NATO spending 2% of each nation’s GDP on something as futile and faithless as weapons of mass destruction? Is it not madness?

In my world the humans and others work in respectful harmony for the production of something greater than ourselves. I am a cog in the wheel, even though the book is mine, other creatives are now coming in and adding to the map of infinity. The sky would be a poor place indeed if there was only one star.

I scored ten out ten!

If you’ve read any of my prior posts, you won’t be surprised to know my relationship with writing has been a challenge, not unlike a turbulent romance, an on-again off-again affair, an excruciating part-time obsession.  That being said, as I brainstormed this week’s topic, my mind focused on the painful truths and absurdities aspiring writers contend with on a daily basis.  There is a commonality with one’s descent into misery, especially amongst like-minded individuals who share a familiar goal. In an ever shrinking global village, our similarities, our passions and dreams often mimic one another.  Like a legion of misfit doppelgangers, identical in spirit, we are connected by a common thread of hope, dreams and aspirations.

In the pretext of empathy, and in the context of shared misery, I came up with the compilation below.  I realize there’s a high probability a similar post exists on the Web (doppelgangers – remember)…